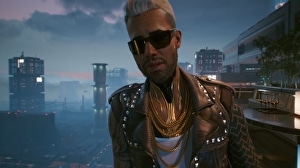 We’re exactly three weeks away from the 10th December launch of Cyberpunk 2077 (fingers crossed), and CD Projekt has marked the occasion with a new five-minute gameplay trailer, as well as a look at its music, star performer, and more.

All of today’s new information comes via CD Projekt’s latest Night City Wire livestream, which was admittedly rather light on the juicy stuff compared to previous offerings. Keanu did, however, pop up to discuss his role as Johnny Silverhand (and to look dashing in a motion-capture ping-pong suit), and we got a brisk but informative delve into Cyberpunk’s music – both its original score and soundtrack.

On the original score front, CD Projekt says it has around seven and a half hours of music in-game, all inspired by the likes of rave, industrial, and IDM to deliver some electronic “90s flair”. Those eager to introduce their ears to Cyberpunk 2077’s score can do so from today, courtesy of a 6-track EP which will be made available across a variety of streaming services.