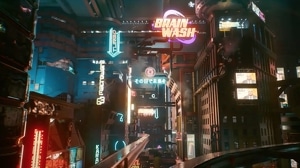 Earlier this week brought first footage of Cyberpunk 2077 running on consoles, and now there’s new footage of developer CD Projekt’s open-world RPG on running on PC with all the settings cranked right up, as seen on Nvidia’s RTX 30-series GPUs – which means ray tracing all over the shop. And if you’re curious to know what sort of PC you’ll need to even come close to these visuals, there’s an updated list of PC requirements to peruse.

If it’s eye candy you want, though, the Nvidia-branded video is the place to be, with three of CD Projekt’s developers – Marcin Gollent, Jakub Knapik, and Miles Tost – talking through the boost Night City’s atmosphere receives thanks to the likes of ray traced reflections, diffuse illumination, ambient occlusion and shadows, and DLSS.

The end result, to my eyes at least, looks breathtaking at times, whether in the striking contrast between the dusty, sunbleached tones of Night City by day and the vibrant chaos of colour after sundown, or the blaze of reflective surfaces seen when the rain begins to fall.