Marvel’s Avengers takes a closer look at next hero Kate Bishop, due in December

Previous Next
Marvel’s Avengers takes a closer look at next hero Kate Bishop, due in December 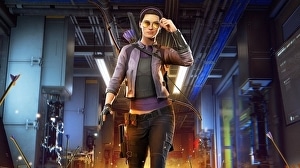 Crystal Dynamics’ video game spin on Marvel’s Avengers might not have done the numbers publisher Square Enix was hoping for, but those players that did join the ride have a bunch of free content to look forward to in the coming months, starting on 8th December with the arrival of new hero Kate Bishop, who’s now been given the full reveal treatment in a new video.

Kate Bishop, the other Hawkeye, joins Marvel’s Avengers as part of its first season of post-launch content. This continues the base game’s story in new chapters referred to as Operations, each forming part of a “interconnected narrative that unfolds and evolves” as new content is added, and each potentially adding new playable heroes, villains, biomes, and more.

The first of these story additions, Operation: Taking AIM, sees Kate Bishop – a “world-class archer and adept swordsman”, voiced by Ashly Burch – searching for mentor Hawkeye (the Clint Barton version), in a journey that eventually leads to a conspiracy involving Nick Fury, time travel, and a new enemy known as the Super Adaptoid.