Star Wars: Squadrons is getting B-Wings and TIE Defenders in December

Previous Next
Star Wars: Squadrons is getting B-Wings and TIE Defenders in December 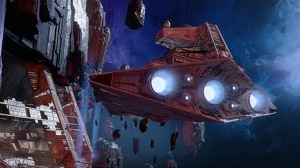 Star War: Squadrons will be getting a pleasant helping of post-launch content after all, despite EA assertions to the contrary prior to release, and the publisher has now revealed it’s prepping two juicy content updates for November and December, introducing, among other things, B-Wings and TIE Defenders to the multiplayer game.

We’ve seen EA deviating from its no-post-launch-content plans once already, of course, in the form of Mandalorian-themed cosmetics to celebrate the TV show’s second season; EA’s next additions, however, will be significantly meatier, beginning with a new update next Wednesday, 25th November.

This one starts by reworking Squadron’s single-player Fostar Haven map for multiplayer skirmishes, and will be available in Fleet Battles and Dogfight modes. “Set in a remote, lawless area of space under the light of twin stars,” explains EA, “this map has been updated from its story mode counterpart to provide a new experience that should fit well with the other six maps.” Its action plays out across both crowded dockyards and open space.