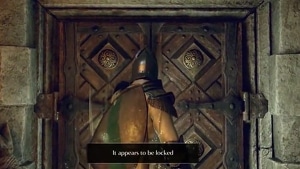 Shortly after the arrival of developer Bluepoint’s Demon’s Souls remake on PS5, players discovered an enigmatic new addition not found in From Software’s seminal 2009 action-RPG: a steadfastly locked door where one hadn’t been before. But now, after some swift communal thinkery, the puzzle has been cracked, the door is open, and its secrets have been revealed.

But first a quick recap for the those latecomers at the back; players located Demon’s Souls’ mysterious new door in World 1-3, squirrelled away at the top of a staircase hidden behind an illusory wall – itself obscured by a mountain of rubbish at the end of an unassuming corridor.

After a few exploratory failures, the community latched onto the theory that the perpetually locked door might be related to an item newly introduced in Demon’s Souls PS5 – the Gold Coin. It seemed especially plausible given that developer Bluepoint’s previous remake, Shadow of Colossus, also included a secret door requiring the accumulation of coins to unlock.